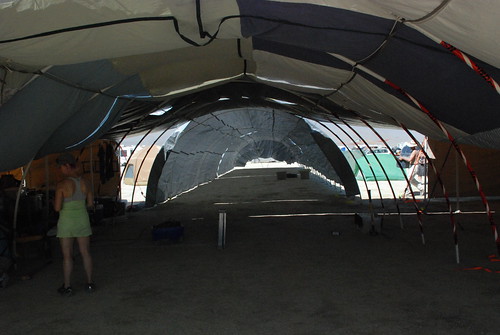 This is a view down the "tube" of the structure I was working on for the last few months. Other then a few bad pieces of rope we replaced on the first day it turned out incredibly well :)

Now I just need to start working out what I will build for next year! 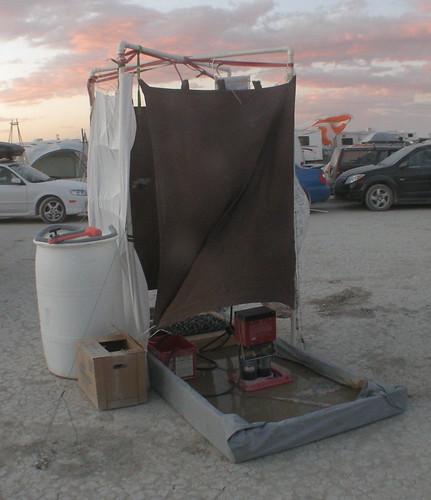 Welcome to your next Hot Shower, originally uploaded by krow.

One flat tire and nearly a thousand miles round trip I am back in Seattle again!

It is really difficult to explain to others exactly what Burning Man is, in large part because it is so many things. Art exhibition, music festival, community, city, party...

Every day the event changes. Black Rock City grows from nothing, evolves into a city of tends of thousands, and then returns to nothing within a week.

No two days of the event are the same.

Saturday's Man burn is completely different from the Temple burn that comes Sunday. The dichotomy between the two is incredible. It is hard to believe that the two occur at the same event, with many of the same people.

At the core is a concept of "radical self reliance". The concept is impossible to escape. It does not matter if you come in a tent or an RV, at some point you will face yourself, your fears, and your own expectations. No matter what happens, no matter if you overcome or fail, you come out differently on the other end.

Standing out on the playa one night, I spoke to a friend who had only just arrived midweek. She was wound up and the look in her eyes were one of apprehension.

I mentioned to her that no matter what, her being there meant that she was going to change.

"That is what I am afraid of."

By the end of the week? She had a smile on her face and was talking about her experience in glowing terms.

That sort of transformation has been the common currency of the event for the people I have traveled with.

Everywhere you walk you are met with people greeting other people. Gift giving, sharing, and warm welcomes are everyday events. I have had people join our camp midweek. I have seen people show up at camp only to return at the end week. They were never seen between those two times.

Sleep is the enemy.

The hardest part of Burning Man?